I know it’s been a while since my last entry. August 2013 to be exact. But I think that this year is a good time to resume writing about the places I’ve been eating in and the stuff I’ve been chowing on. Let’s see how long I’ll last this time around.

And what better way than to recap the delicious year it has been?

The following list is a compilation of the local dishes and drinks that wowed me for the first time in 2014. For some of them, sadly, it was also the last. 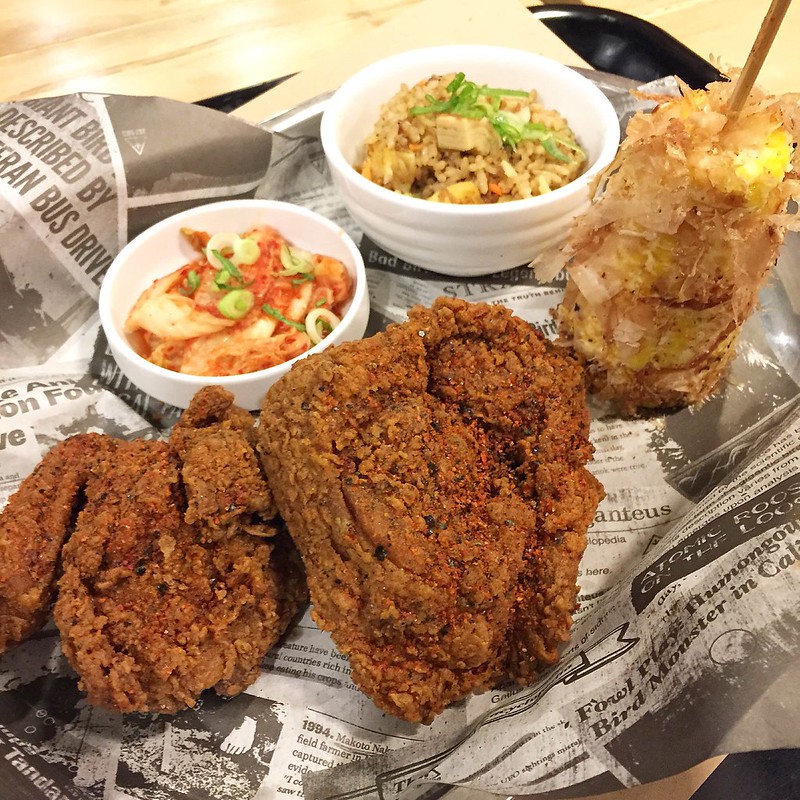 “Come for the Umami Fried Chicken, come back for the Corn on the Cob!” That should be Bad Bird’s tagline.

The line at Bad Bird is no joke and the waiting time to get your food is no laughing matter either. But if you’re patient enough to brave the wait, the delicious, juicy, finger lickin’ Umami Fried Chicken should be reward enough. But wait! There’s more! As awesome as their fried chicken is, it’s their Corn on the Cob that has me raving.

Steamed Corn on the Cob smothered in Kewpie mayo and cheese, generously dusted with togarashi, and finished with a heap of bonito flakes for good measure.

If you noticed in the picture above, I didn’t even think of taking a close-up shot of the corn. I didn’t think it warranted its own solo. But that was before I tried it. Sorry, corn. Does anyone know if Chat Peypoch still accepts bookings? 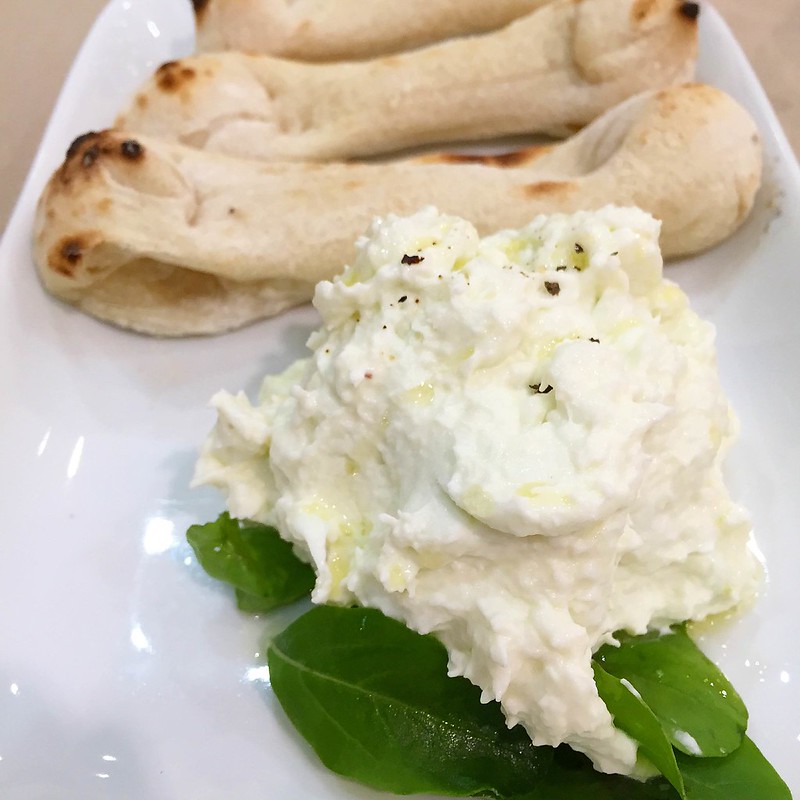 2014 was the year when my Instagram feed was flooded with photos of Gino’s Brick Oven Pizza’s widely popular Burrata. And deservingly so. But personally, I like their Stracciatella even better. Creamy, lumpy, stringy, and slightly salty…oh man!

Oh, and the bread that comes with it is amazing in its own right.

Pro tip: Order the Stracciatella with a side of pesto. Fold in all of the pesto in the cheese and drizzle a bit (or a lot, totally up to you) of the spicy honey. Now use the bread to mop up all of that cheesy goodness! 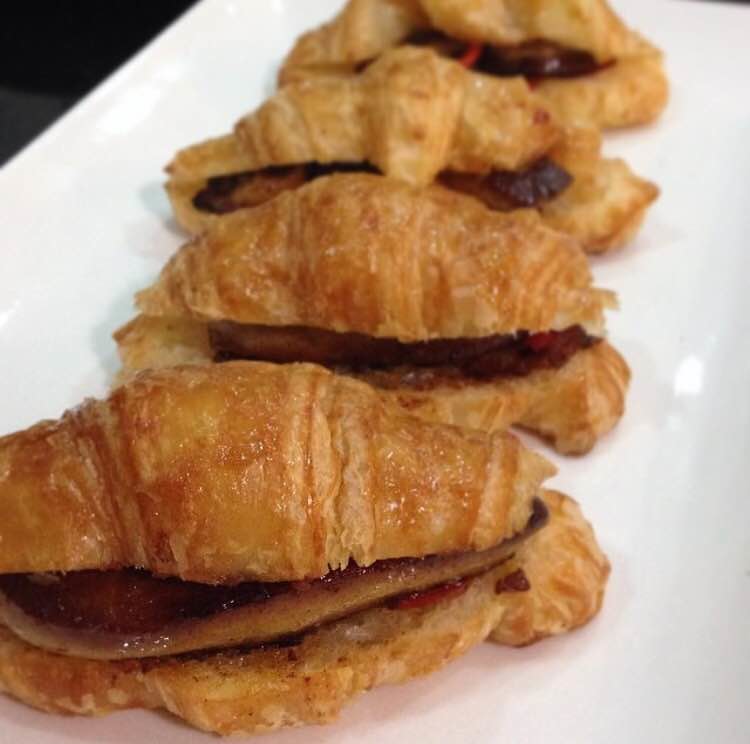 Late-2103 until about mid-2014, my cousin Miko and I ran small pop-up dinners in different locations where we’d serve 7- to 9-course degustation dinners to about 20-30 diners. We called it Underground Supper Club.

The dishes that we served were collaborations that we worked on in our Underground Supper Lab sessions. The most memorable dish that came out of UGSLab and the clear crowd favorite during the UGSC dinners was the Foiessant.

That’s right, it’s a sandwich. A foie gras-bacon jam sandwich. Let that sink in for a while.

For those who didn’t get to try the Foiessant, don’t fret. Underground Supper Club will be having a few pop-up dinners in 2015. Stay tuned! 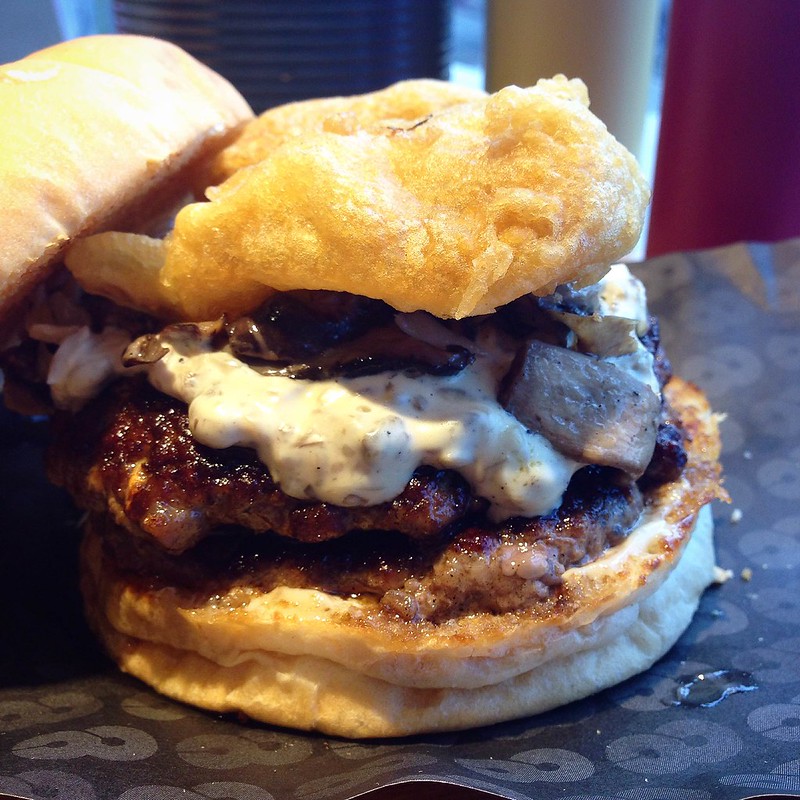 With the probable arrival of Shake Shack in 2015, the local dime-a-dozen burger spots are probably shaking in their buns right now. But if there’s one homegrown burger joint that can give Danny Meyer a run for his money, it’s probably 8 Cuts Burger Blends.

My go-to burger in 8 Cuts is their luxurious Rising Shroom Burger. They start off with slathering a quarter (or a third) pound Steak Cut blend patty (sirloin and chuck) with mustard and frying it on a flat top until a nice brown crust is formed. Then they top it off with some sauteed mushrooms, white truffle cream cheese, and a fried oyster mushroom tempura. Finally, they place that monstrosity in between a kaiser roll.

From the first bite onwards, things start to get messy. Mushrooms start to slide off, beef juices start dripping, the tempura crust starts breaking off, and globs of cream cheese start to splatter onto the plate. Don’t worry, messy is good. It just means you’re eating it right. 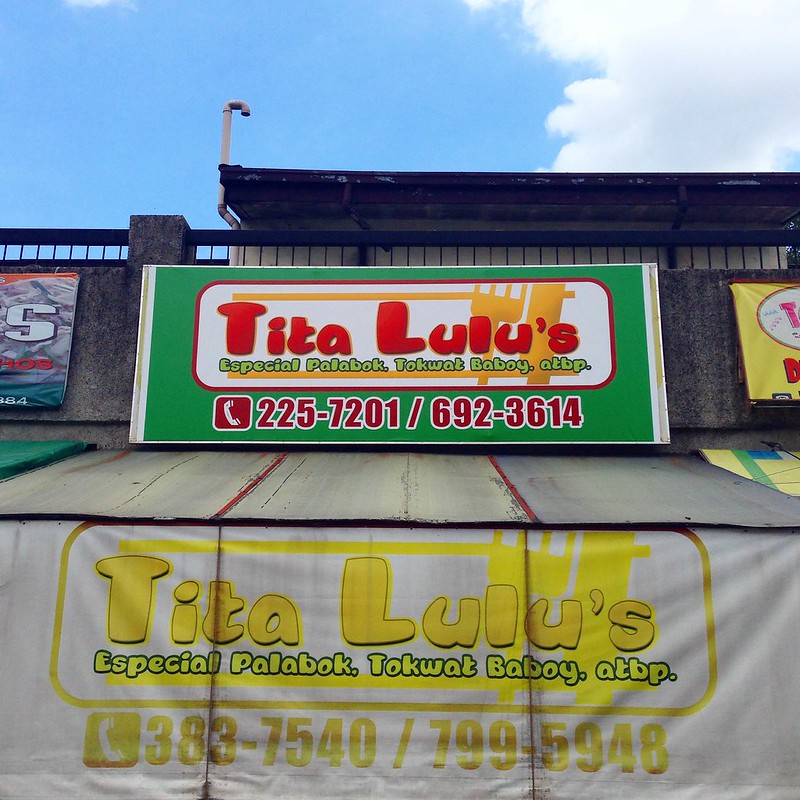 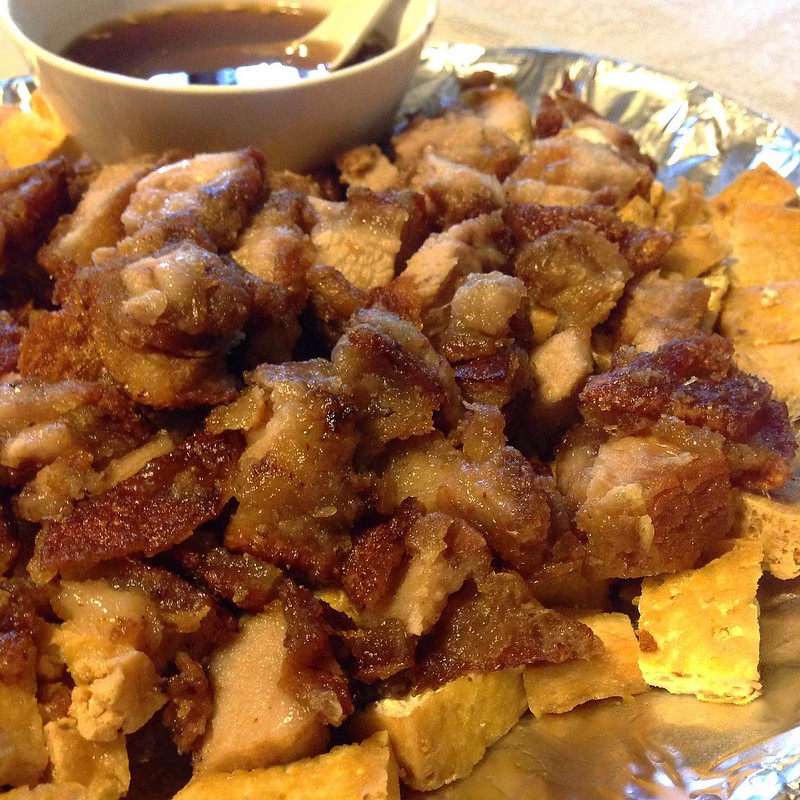 Going to a potluck party (or inuman)? Bring a bilao of Tita Lulu’s Tokwa’t Baboy.

I don’t dish out the term “best” too often but I’d be shortchanging you if I didn’t say that this is the best Tokwa’t Baboy I have ever eaten. Bite-sized fried tokwa. Lechon kawali-esque baboy. Onion-y garlicky sweet-ish vinegar. ‘Tarages!

Don’t forget!!! Potluck = this Tokwa’t Baboy. You (and the rest of the guests) can thank me later. 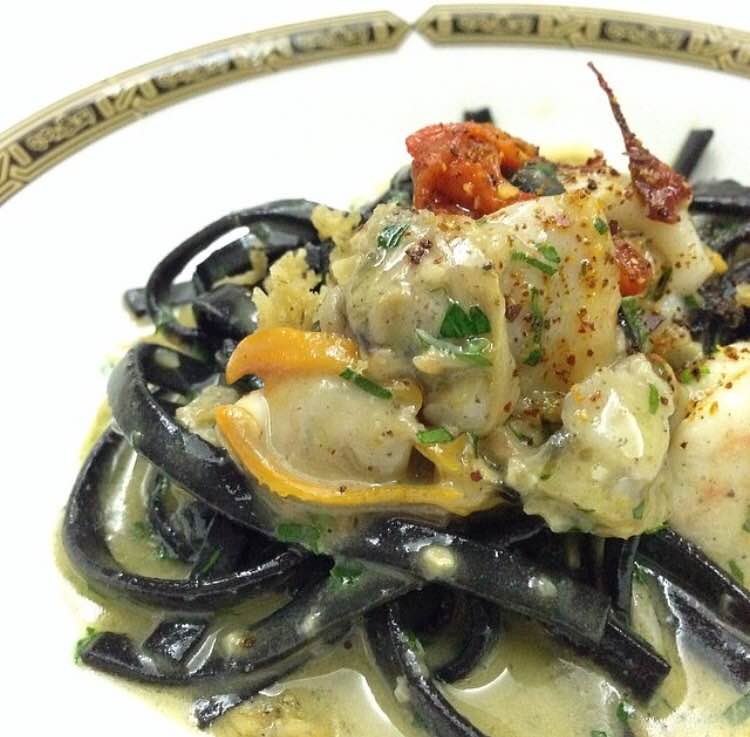 Sometime in March, we were treated to a degustation dinner in my mom’s house by Chef David Thien, former chef-proprietor of Shelter in the Woods in Singapore and my cousin Miko’s former sous chef in L’Atelier de Joel Robuchon, Singapore. He was in town to check out the local food scene since he’s been thinking about opening up shop here in Manila.

Before anything, I would like to thank the following for making this dinner happen…

So on his last day, David and Miko prepared a 7-course degustation dinner for about 10 people (and I even got to help!). My mom’s kitchen never heard so much French and Singlish. The words “Merde!” and “Poutain!” were thrown around a lot.

The whole meal was perfect, from the ceviche all the way to the Valrhona moelleux. But what I liked most was the simple pasta dish — Squid Ink Pasta with Pan-grilled Seafood and Beurre Monté. The clams, squid, and shrimp were all cooked a la plancha and the sauce was a simple butter emulsion with clam juice mixed in. The dish was finished with a mound of crispy-fried dilis on top. Poutain! 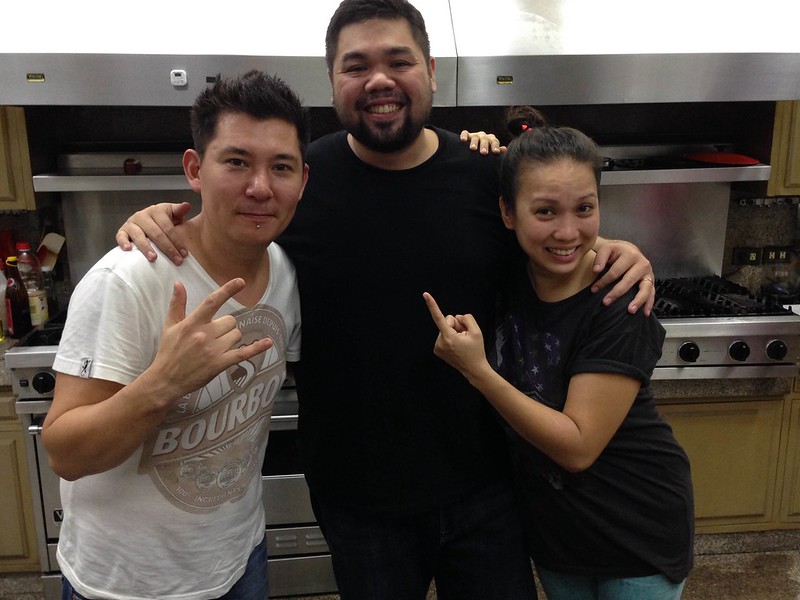 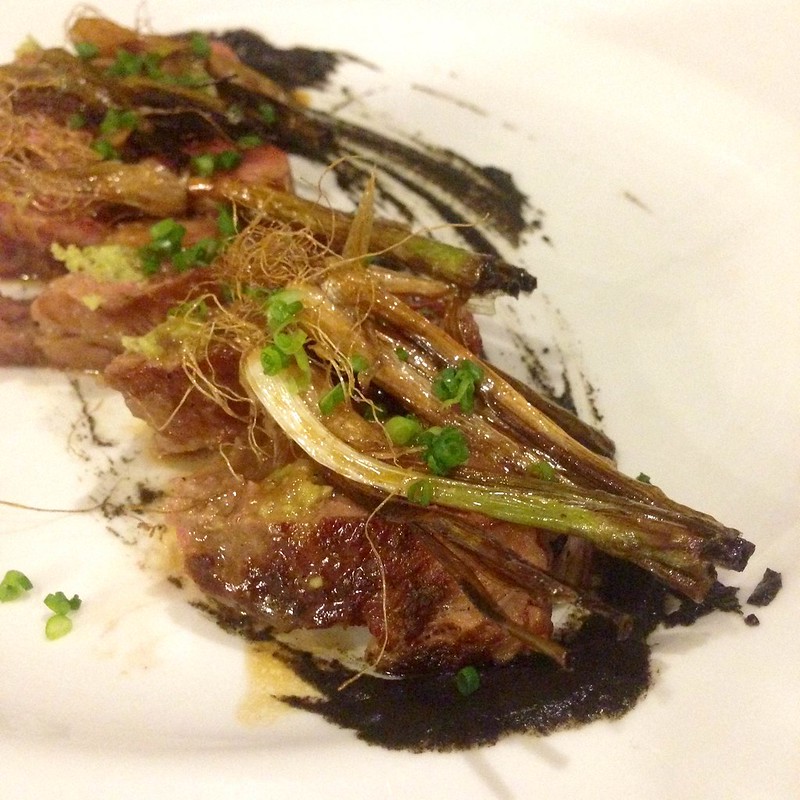 Before Mecha Uma, there was Sensei Sushi. A small, nondescript hole-in-the-wall along Aguirre St. in Parañaque where Chef Bruce Ricketts let his imagination run wild.

Of the 12 courses that we were served, one dish in particular stood out — the Wagyu Steak with Burnt Eggplant and Scallions.

Now Wagyu Steak is Wagyu Steak. It’s pretty hard to fuck it up. But what impressed me about this dish was his garnish of burnt eggplant and scallions. Wagyu is pretty much fat with a bit of meat so you really can’t cook it too long. So I’m guessing that the burnt eggplant and scallions was to add the much needed smokey char that you’d find in a perfectly cooked steak. 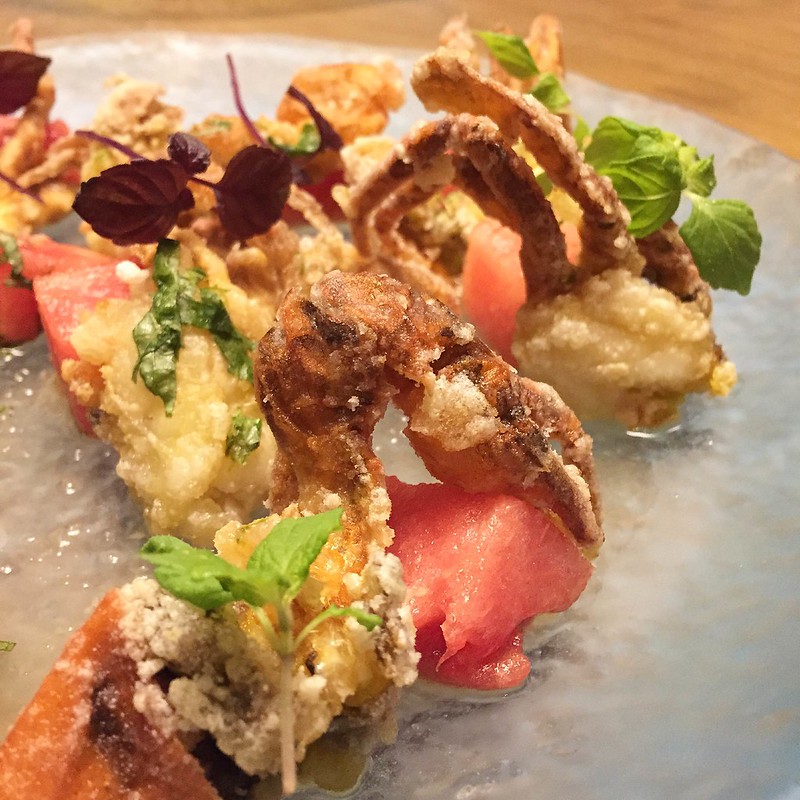 New Year’s Eve dinner was at the newly-opened Nobu restaurant in City of Dreams. Since we were a big group of about 15, our waiter suggested that we order family style, or as our family calls it “share-share.” As in “order tayo ng madami, share-share nalang.”

Every time we dine in a Japanese restaurant, my dad will almost always order the soft shell crab dish. However, the only items in the menu with soft shell crab were the sushi rolls. So the waiter also suggested that we get the off-menu soft shell crab item — the Soft Shell Crab with Watermelon.

Needless to say, he is now my favorite waiter ever.

Most of the dishes we ordered were nothing short of amazing but the soft shell crab was something else. Finished with a light amazu ponzu dressing, the soft shell crab and the watermelon was a perfect combination. Sweet and salty, crispy and mushy, umami unami umami. 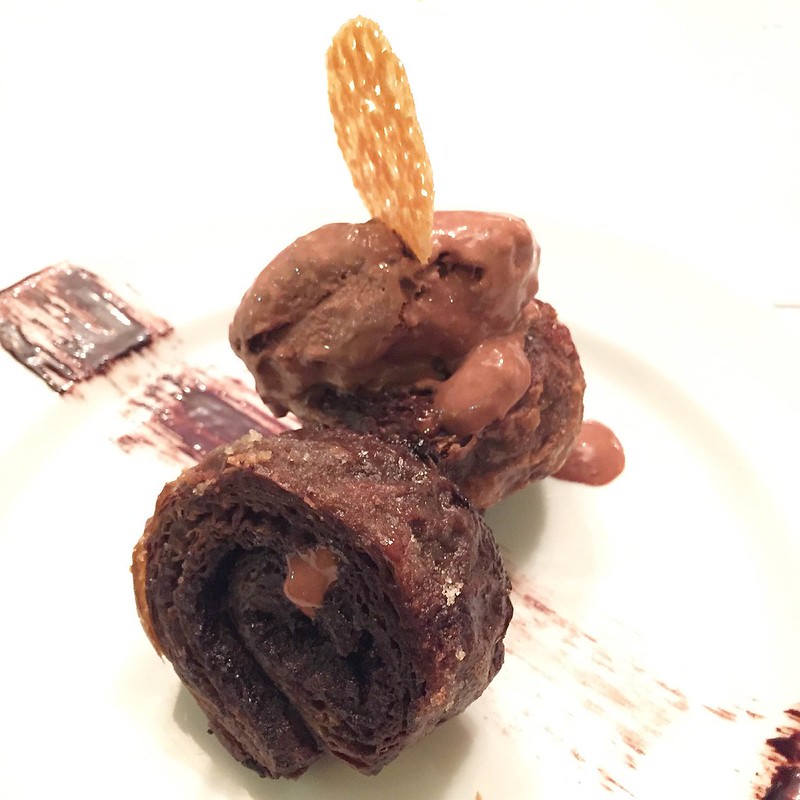 I’m not much of a dessert person and I usually cap my meals off with just a cup of coffee. But I always, ALWAYS make an exception for Ciçou and order the Kouign Amann au Chocolat (pronounced as hoe-lee-muh-thur-ohv-gawd or something like that).

If you’re a chocolate lover then this is for you. Two small-ish pieces of chocolate kouign amann, a quenelle of homemade dark chocolate ice cream, and a sprinkling of chocolate bits, just in case the dish wasn’t chocolate-y enough.

Ciçou’s Kouign Amann au Chocolat is so chock full of chocolate that I sometimes forget that it’s the butter content in this dessert that’s probably going to do me in. 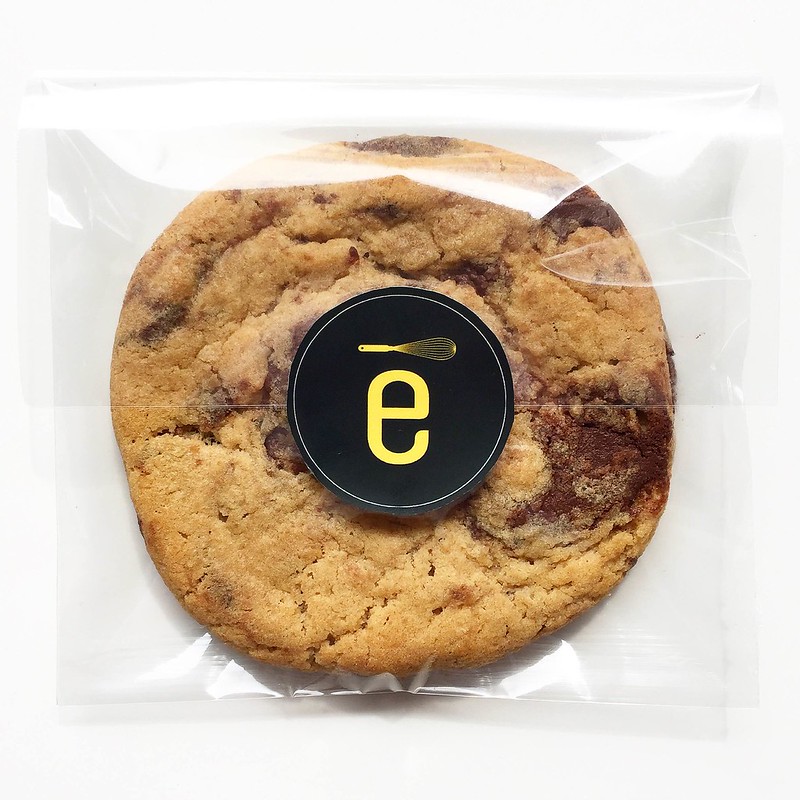 Bakerē’s Chocolate Chunk Cookie isn’t your average cookie. First of all, chunks > chips. Believe that. This ensures that you get the right amount (read, a lot) of chocolate with every bite. Secondly, the cookie is the perfect size. Bigger than your everyday cookie, you won’t feel the need to eat more than one. Although you may. And you probably will. Lastly, the size ensures that while the cookie is slightly crispy around the edges, the center is still perfectly baked and chewy. You know, like how a proper cookie should be.

I probably am. But once you taste this cookie you’d probably wish that my mom would adopt you. 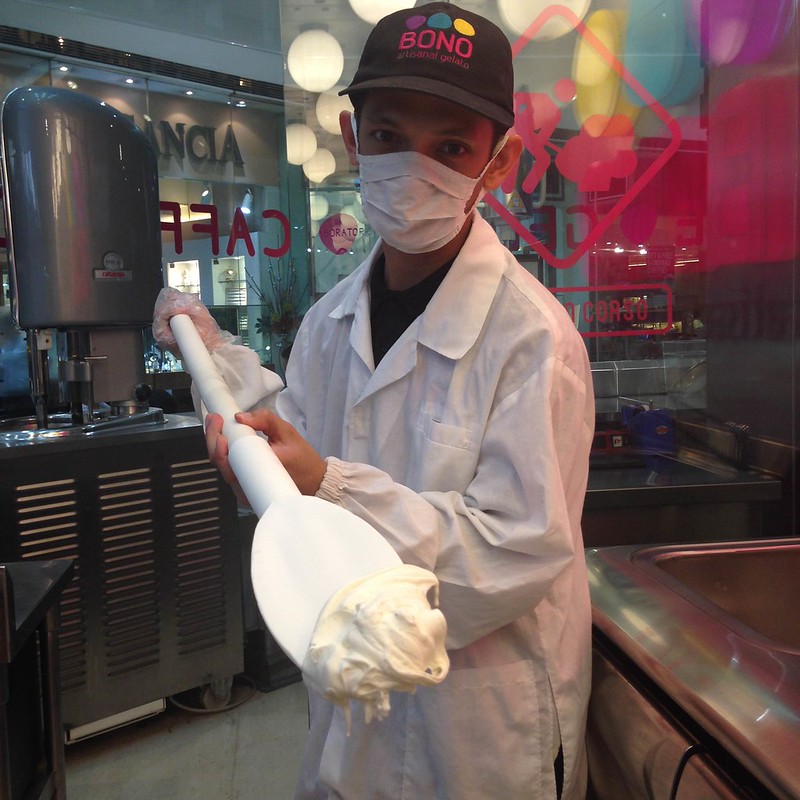 Why did you have to invite me and my family over to the BONO outlet in The Podium to show us how gelato is made? Or to be more precise, how to properly make and store gelato. Now whenever I see a gelato display case, I cringe.

Why did you have to show us how the Cattabriga works? How it turns simple cream to the smoothest and silkiest of gelatos.  Now I want one in my kitchen.

Why did you have to make Rocio try the freshly-churned Vanilla gelato? She used to be happy with just any ice cream shop we happen to pass by, you know. Now it has to be BONO.

Why did you have to make ME try the freshly-churned Vanilla gelato and show me how perfect simple can be?

I love your gelato.

But I hate you. 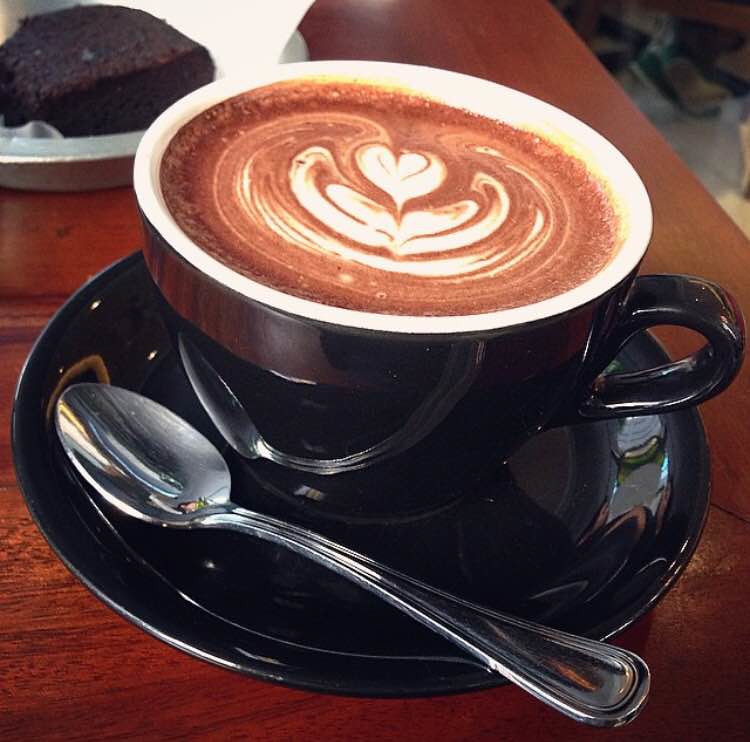 As with all good meals, let’s end this list with an amazing cup of coffee. Specifically, Toby’s Estate’s Café Mocha. While I prefer ending my meals with a latte or a simple cup of americano, I don’t mind having a mocha for breakfast or during merienda.

Toby’s espresso is pretty darn good to begin with. Now mix in a few parts of chocolate powder from Ghana and some steamed milk and you’ve got yourself one helluva cup my friend. If you’ve ever wondered what a warm hug tastes like, this is probably it.

So that’s it, my 12++ most favoritest things that I ate and drank in 2014. With all of the confirmed and unconfirmed restaurants opening in Manila this year, I have little doubt that 2015 will be an equally awesome year for food.

Oh and by the way…since you’ve made it this far into the post, let me share with you the most disappointing dish I had in 2014. 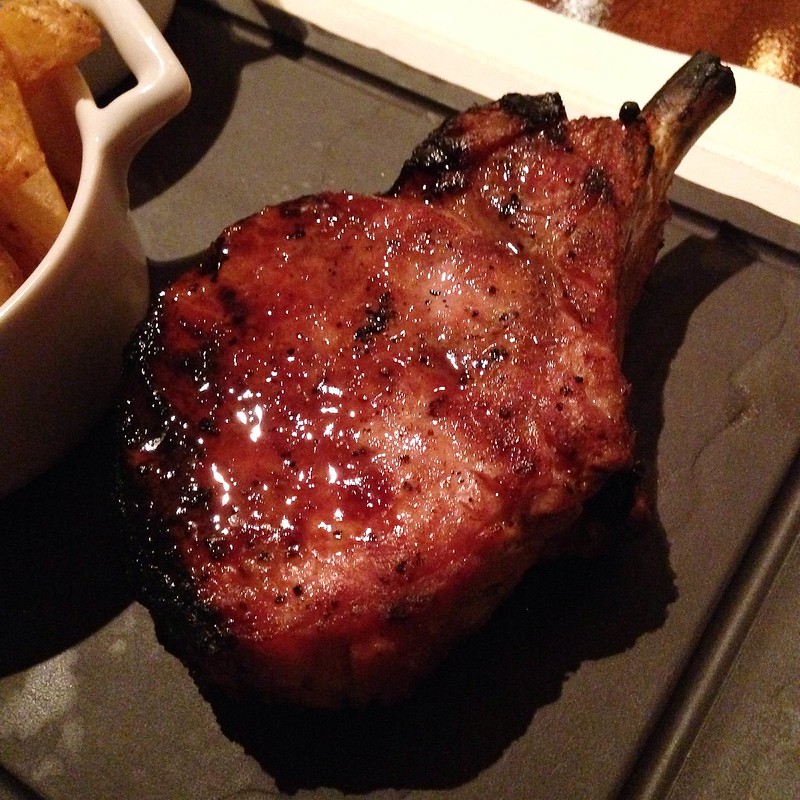 This is probably the saddest piece of pork I have ever put in my mouth. Not just Kurobota pork but pork in general. The meat was tough, dry, and tasteless. I cry for this pig. Sage, brining is your friend.

I’d hate to end this post on a sad note so here’s a picture of my daughter eating a lechon. 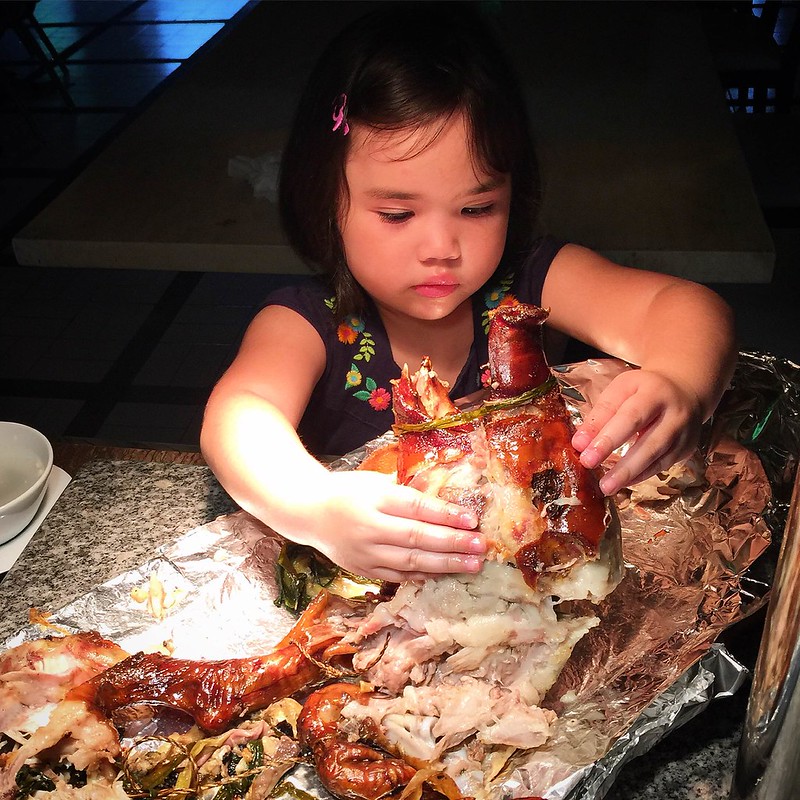